A SPIRITUAL CLASSIC COMES TO THE SCREEN 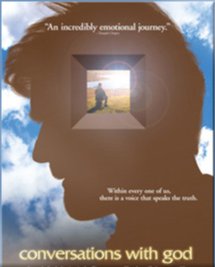 Conversations With God opens in theaters this coming Friday, October 27, 2006 and in Canada, November 10.

The film chronicles the dramatic journey of a down-and-out man who becomes a spiritual messenger and bestselling author. Adapted from the books by Neale Donald Walsch that inspired and changed the lives of millions worldwide, Conversations With God tells the true story of Walsch (brilliantly portrayed by Henry Czerny) who, at the lowest point in his life, asks God some very hard questions. The answers he gets become the foundation of an internationally acclaimed book series that has sold over 7 million copies and been translated into 34 languages.

“This movie is a marvelous illustration of how a life can transform, from something so seemingly hopeless to something miraculously good.”
–Marianne Williamson

I highly recommend that you go see the film this weekend. Lets show the media and the studios that we will turn out to see a movie about love and compassion, not the Hollywood formula of fear and violence.

Conversations With God is a production of The Spiritual Cinema Circle, America’s fastest growing DVD club specializing in inspiring and uplifting films. Each month Circle members receive 4 or more films that open the heart, expand the mind and stir the soul – films that make you feel better about being human. These shorts, documentaries, and features come from film festivals around the world. (The DVD is yours to keep!)