Louise Hay – Love Is All There Is

Tune in for a very special Valentineâ€™s episode as the “Manifesting Awesomeness” boys interview the one and only Louise Hay. Many call her one of the founders of the self-help movement, and for good reason. Louise has multiple best-selling books available in over 25 languages and is also the founder of Hay House publishers, which is the host of many of todayâ€™s greatest spiritual authors and teachers. 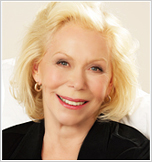 At 81 years young, Louise has been described as a “walking Saint,” and the boys had the privilege of meeting her in San Diego at the end of 2007. Now itâ€™s your turn to meet Louise Hay as the Junior Attractors question her on her life and philosophies. Learn what Louise has to say about the healing powers of love and affirmations.

To close this special Valentineâ€™s Day episode, youâ€™ll even get to hear the beautiful, high vibing acoustic music from the boyâ€™s good friend â€œShyneâ€ as they play their song “Love Is All There Is!”